You don't have any saved vehicles!

Look for this link on your favorites:

Once you've saved some vehicles, you can view them here at any time.

When it comes to high-performance luxury cars, there is one name that towers above the rest - BMW. This German manufacturer made its name with its iconic sports sedans, but today its best-selling models are its luxurious and athletic Sports Activity Vehicles (as BMW calls its SUV models). The first of these SAVs was the BMW X5, which hit the market back in 2000. Today, a used BMW X5 makes for an affordable and practical way to enjoy the ultimate driving experience that only a BMW can offer.

Having been in production for 20 years now, the BMW X5 is a relatively common sight on the used market. Further, the four generations and many variants of this model mean that it is possible to find a used BMW X5 to fit nearly any budget. From older base trims all the way up to recent model years packed with luxury features, there are plenty of options to choose from. 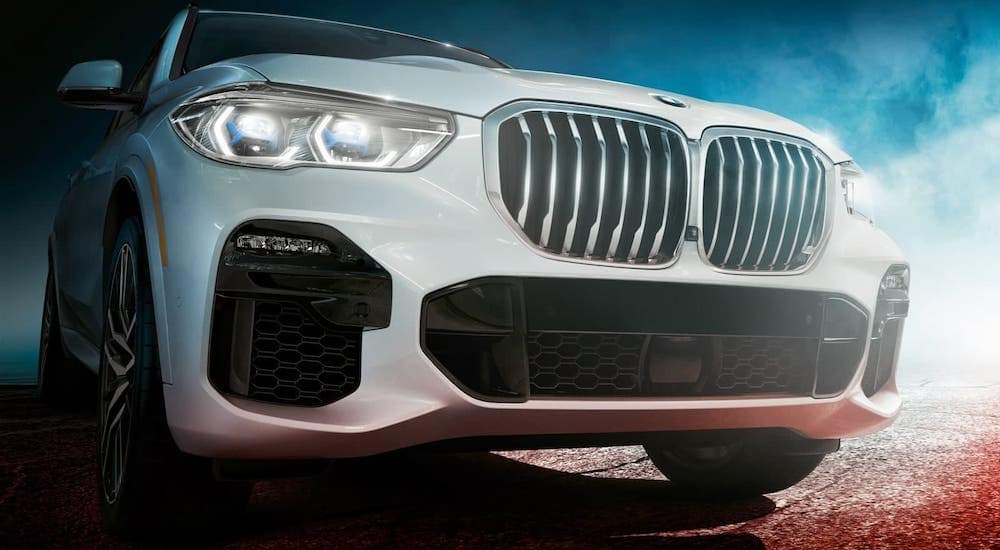 Perhaps the best value on the used market is a BMW X5 from the 2014 to 2018 model years. Not only is this period the sweet spot for used vehicles in general, but it represents the third generation of the BMW X5. This was the first generation of the BMW X5 to offer frontal crash prevention and a hybrid powertrain, among various other modern features.

However, if you are looking for a more affordable used model, the second and even first generations of the BMW X5 are well worth considering. While they may not be as technologically advanced as later models, they offer a pure BMW driving experience. Models from 2011 and later will give you a selection of powerful turbocharged engines, while vehicles from before that year come with rugged naturally-aspirated engines.

No matter which model year and trim of the BMW X5 you settle on, you will enjoy precision-engineering and luxury features in a practical package. While there are many competitors to BMW, none of them provide the same performance spirit. A used BMW X5 is the perfect way to experience that spirit at an affordable price.

What Engine Does the BMW X5 Have?

All four generations of the BMW X5 have been powered by a standard inline-6 engine and have had the option of a more powerful V8 engine. A diesel engine was available from 2009 to 2018, and a hybrid option was introduced for 2016. However, the exact engine specifications of the BMW X5 will depend on the model year in question.

When shopping for a used BMW X5, you will have a large number of engine options to choose from. These range from the original 3.0L inline-6 that produces 225 hp and 214 lb-ft of torque, all the way up to the latest 4.4L turbocharged V8 with its 523 hp and 553 lb-ft of torque. You can even occasionally find used high-performance M-Series versions of this car that offer even more power. However, no matter which engine you settle on, a used BMW X5 will provide an exceptional driving experience.

The 2011 refresh of the BMW X5 replaced both of the gasoline engines with all-new turbocharged options. The base engine remained a 3.0L inline-6, but it now produced 300 hp and 300 lb-ft of torque. The optional V8 shrank slightly to 4.4L, but the output increased to 400 hp and 450 lb-ft of torque. All BMW X5 engines after 2011 would be turbocharged for greater power and efficiency.

Introduced in 2014, the third-generation BMW X5 kept the same three-engine lineup as the preceding generation. However, while the 4.4L V8 boosted to 445 hp and 479 lb-ft of torque, the base inline-6 kept the same power numbers as the previous year, and the diesel option dropped slightly to 255 hp and 413 lb-ft of torque. In 2016 a fourth engine was added - an all-new plug-in hybrid powertrain that combined a 2.0L turbocharged engine with a lithium-ion battery back. This system produces 308 hp and 332 lb-ft of torque and can travel 14 miles of battery power alone.

The fourth-generation of the BMW X5 was unveiled for 2019 and is still quite rare in the used market. While the diesel engine was dropped from the lineup, the gasoline options received a bump in performance. The base 3.0L inline-6 produces 335 hp and 330 lb-ft of torque, while the optional 4.4L V8 generates 456 hp and 479 lb-ft of torque. The hybrid option was late to the market, arriving for 2020, but was entirely redesigned with a 3.0L engine that delivers 394 hp and 443 lb-ft of torque.

What Luxury Features Can Be Found in a BMW X5?

The BMW X5 is filled with luxury features, including twenty-way power-adjustable seats, a panoramic moonroof, four-zone automatic climate control, automatic dimming mirrors, and multiple driver memory settings. Infotainment features include dual 12.3” screens, BMW’s voice-activated assistant, and sixteen-speaker premium audio. However, the exact features will, of course, depend on the packages, trim level, and model year of the BMW X5 in question.

While the technology may seem primitive by modern standards, even the original BMW X5 from the 2000 model year offered modern features such as navigation, a reverse camera, parking sensors, and rain-sensing windshield wipers. Since then, the list of luxury features has only grown, and more recent models will astound you with their level of technology and physical comforts. While BMW may build the most performance-oriented luxury vehicles, they are undeniably luxury vehicles.

The fourth-generation BMW X5, which is the most common version on the used market, boasts an interior that can compete with any modern car. With a standard 10.2” infotainment screen that offers built-in navigation and 360-degree camera views, the 2014 model year does not feel like a six-year-old car. Throw in the meticulous build quality and top of the line interior materials, including leather and wood trim, and you have yourself a vehicle that will turn every ride into a relaxing experience.

At Car Factory Direct, we specialize in providing high-quality used vehicles to drivers in and around Milford, Connecticut. If you are looking for a less common luxury or performance model such as the BMW X5, we are here for you. Because we focus on selling these unique vehicles, our team knows what to look for and what to avoid when stocking our inventory. This means that you can buy secure in the knowledge that you are getting a used car that will provide you with years of reliable service.

We also have our own in-house service center that goes over every vehicle that we take in before we put it up for sale. You can trust our skilled technicians to catch and repair any potential issues, giving you a used car that you can count on. If you live in the Milfort area, or don’t mind the drive to us, then our service center is also available to maintain or repair your vehicle, helping you keep it on the road for years to come. We even sell original factory parts through our parts center, giving you the option of maintaining your vehicle yourself if you prefer to save some money.

When you buy from Car Factory Direct, you will find a dealership that will take care of you throughout the car buying and car owning process. Our friendly staff is here to help you out every step of the way, whether you have questions about vehicle features, financing options, or maintenance and care. If you are looking for something more than your run of the mill used car, then it is time to head to Car Factory Direct. Visit us today and discover what buying a used car should be like.

You don't have any saved vehicles!

Look for this link on your favorites:

Once you've saved some vehicles, you can view them here at any time.